The Hoon Hay Community Centre was officially opened on Saturday, 2nd July 2016. The centre is owned by Christchurch City Council.

Prior to the opening of the Hoon Hay Community Centre, 90 Hoon Hay Road was known as the Hoon Hay Children's Voluntary Library. The library was constructed and founded in 1966 prior to the development of the Christchurch City Council's role as provider of public library services. In the 60s, it had 1,700 child members, issued 38,000 items per annum (46,000 in the first year) and had 30 volunteers doing desk work. The Library was built leaving room on the site for an adult library if necessary. 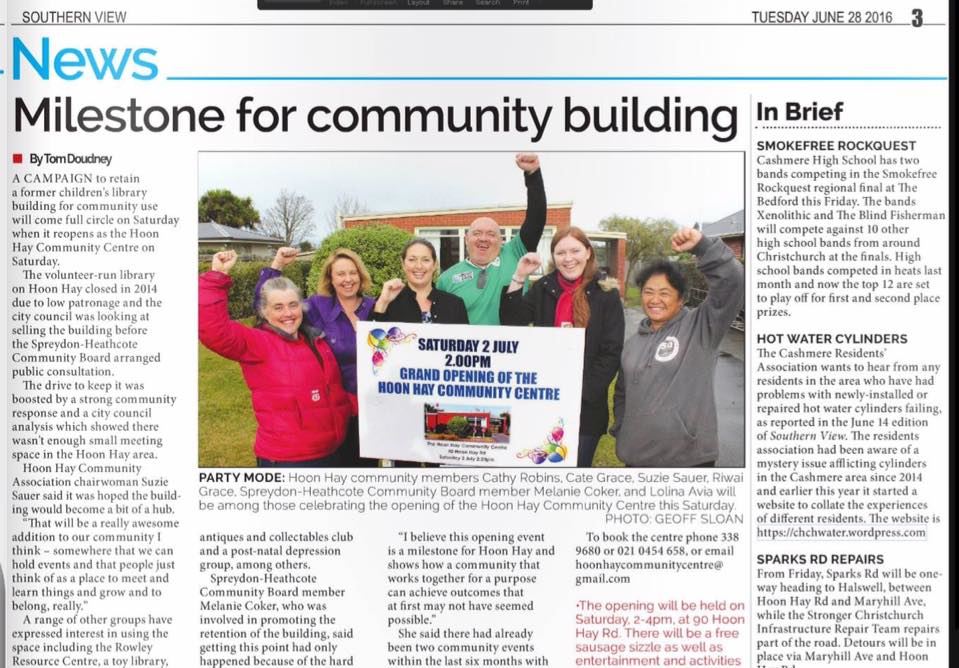 When Spreydon Library opened in 1971, issues reduced significantly at Hoon Hay Library. Following the Canterbury earthquakes the Hoon Hay Library sustained no earthquake damage, but broken pipes on the section and road meant the library was closed for 4-5 months. Since the earthquakes, membership declined further and there was a reduction in issues and volunteers. As of September 2013 the membership was 200-300 with 10-20 local families being frequent visitors. The opening hours were Wednesday to Friday 3pm-4-30pm and Saturday (4.5 hours per week).

Hoon Hay Children's Voluntary Library closed on Wednesday 17th December, 2014. The decision to close the library was made by the committee due to declining membership and use of the library. There were four library committee members when the library closed its doors for the last time - Merle Lepper, Lorna Holland, Vanessa Crisp and Mabel Ch'ng.

Nearly a year after the Hoon Hay Childrens Library closed Merle Lepper, Lorna Holland and former volunteer June Hulme were presented with a Community Service award in recognition of their many years of voluntary service to the library. Lorna Holland and Merle Lepper volunteered at the library from the day it opened in 1966, to the day it closed in December 2014 - a total of 49 years. June Hulme volunteered for 47 years. All together the trio contributed 145 years of service.

At the opening of the Hoon Hay Community Centre, Merle Lepper ceremoniously cut the cake, to celebrate the new beginnings of 90 Hoon Hay Rd as a community centre - a building and community come full circle. 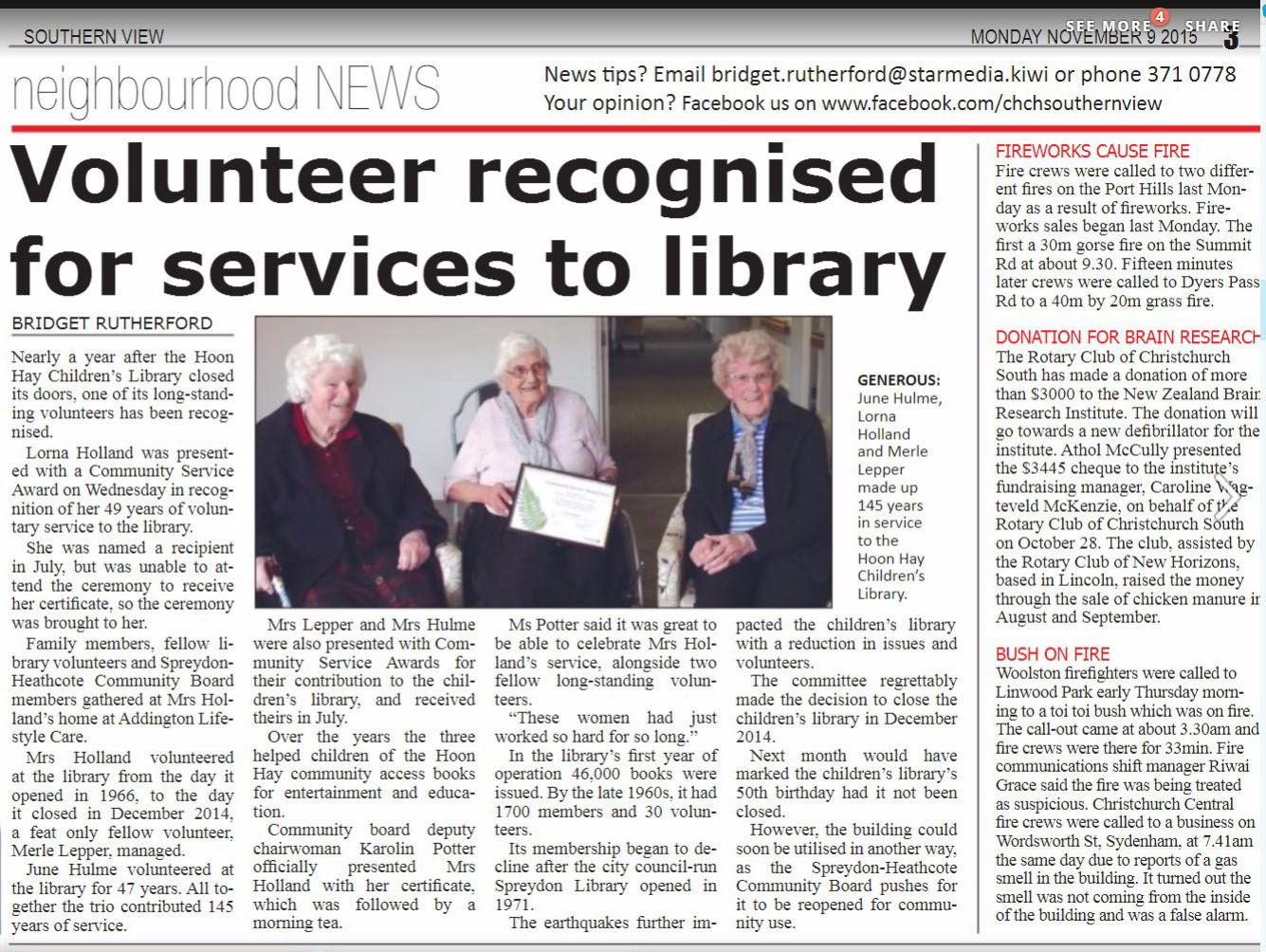 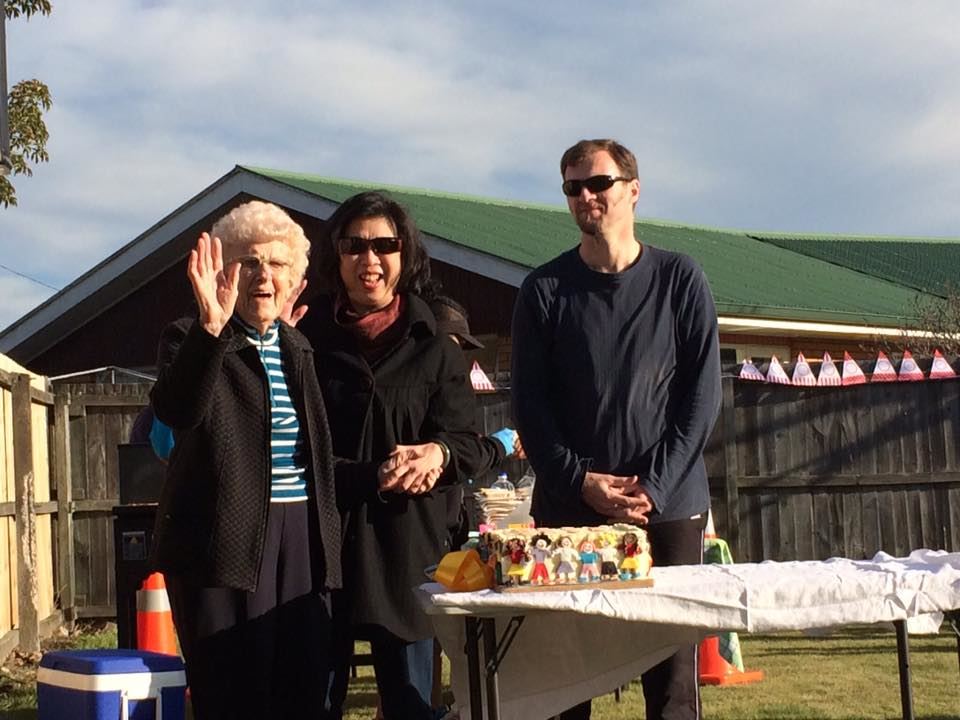 Please confirm you want to remove all the items in your cart.

Please Login or Order as a New Customer

When you've finished you'll have the option to create a password which will allow you to save your details and make your future purchases even faster.

Are you sure you want to log out of the site?

Thank you, your message has been sent successfully.